How to Celebrate the Chinese New Year 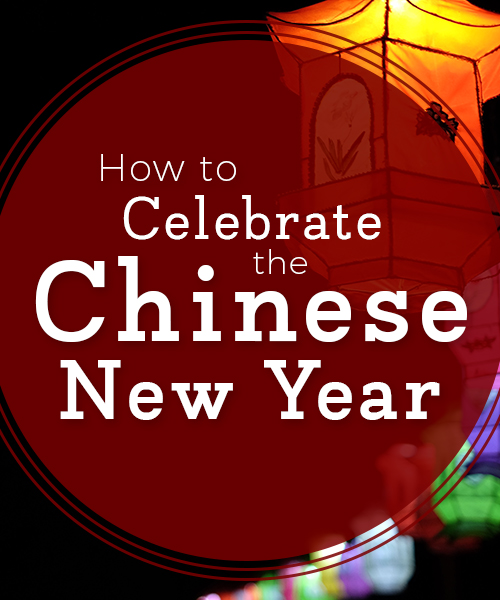 Start a new tradition in your family by celebrating the Chinese New Year. In the Chinese culture, the celebration holds significance because it starts the new year off in a positive way, which is thought to bring luck, prosperity and good fortune going forward. Also known as the Lunar New Year or the Spring Festival, the Chinese New Year traditions include many activities and items you can easily adapt for your own celebration.

What Is the Chinese New Year?

This holiday serves to celebrate and represent many things, including:

Traditionally, the Chinese New Year focused on farming and was meant to celebrate the completed farm work while hoping for a bountiful harvest in the new year. As people moved from farming to more business-type careers, the celebration began focusing more on success at work and good profits for the year. Despite modern changes, though, the holiday still focuses on entering the new year with hopes for blessings, good luck and success.

Many of the traditions behind the Chinese New Year’s celebration started during the Shang Dynasty, when it was believed a monster named Nian would eat children and livestock. Loud sounds and the color red scared off the monster according to legend. This led people to decorate in red and make loud sounds, primarily in the form of firecrackers. Those concepts still play a major role in the modern Chinese New Year’s celebrations.

When Is the Chinese New Year? 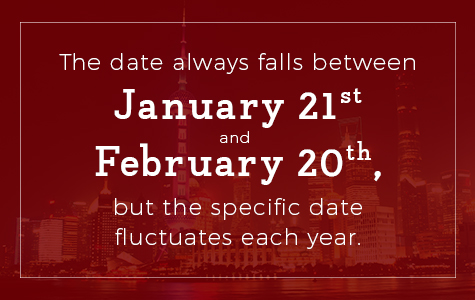 The Chinese New Year does not fall on January 1st, and it doesn’t fall on the same day every year. The Chinese lunar calendar dictates the date of the holiday each year instead of the Gregorian calendar that is most familiar and commonly used. The Chinese New Year holiday lines up with the second new moon after the Winter Solstice. The date always falls between January 21st and February 20th, but the specific date fluctuates each year.

Preparation for the Chinese New Year begins in the last lunar month of the year in anticipation of the new year. The events continue past New Year’s Day.

The typical phases include:

Several symbols and items play key roles in the festivities. When planning your own Chinese New Year’s celebration, incorporate these symbols when possible to create a more authentic experience. Discuss the purpose and significance of the symbols with your kids to help them learn more about the celebration. 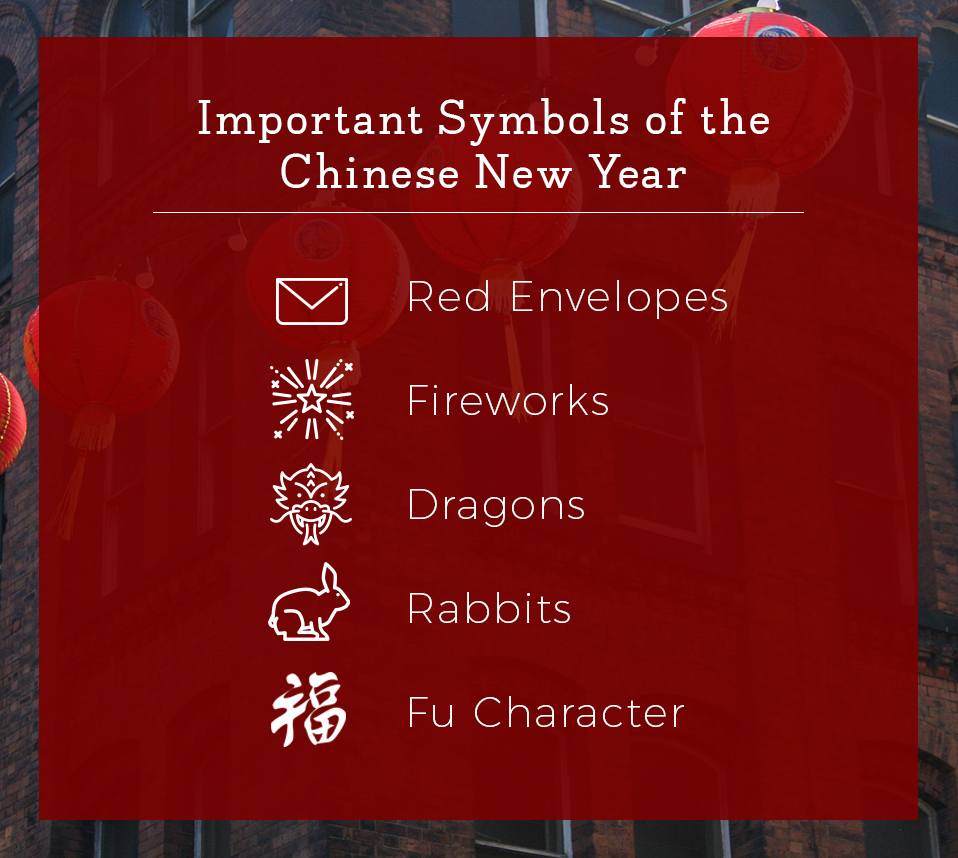 Some of the common symbols of the Chinese New Year include:

Preparing for the Chinese New Year

If you want to celebrate the Chinese New Year authentically, start with the preparation phase in your own home. Leading up to Chinese New Year’s Eve, clean your home to get rid of the old in preparation for the new. Think of it as an early start to your spring cleaning. Get the kids to clean willingly by playing up the role of cleaning as part of the celebration and welcoming the new to your home.

Plan a shopping trip for all of your Chinese New Year decorations and foods, too. Unless you visit or live in China, you won’t likely have to deal with shop closures, but you will be fully prepared with all of the supplies you need for your celebration. Buy each family member a new outfit for the event. If you have kids, talk to them about the significance of these activities to get them excited about starting anew.

Decorating for the Celebration

Decorating for the Chinese New Year is a simple way to celebrate the holiday no matter where you live. While some people decorate ahead of time, many people wait until Chinese New Year’s Eve to put up the decorations. Red plays a prominent role in the festivities, so most of the decorations are red as well. Each year is also associated with an animal based on the Chinese animal zodiac cycle, so decorations incorporating that year’s animal are common. For example, 2017 is a rooster year, while 2018 is a dog year, and 2019 is a pig year. Decorations for the 2017 celebration likely include images of roosters. 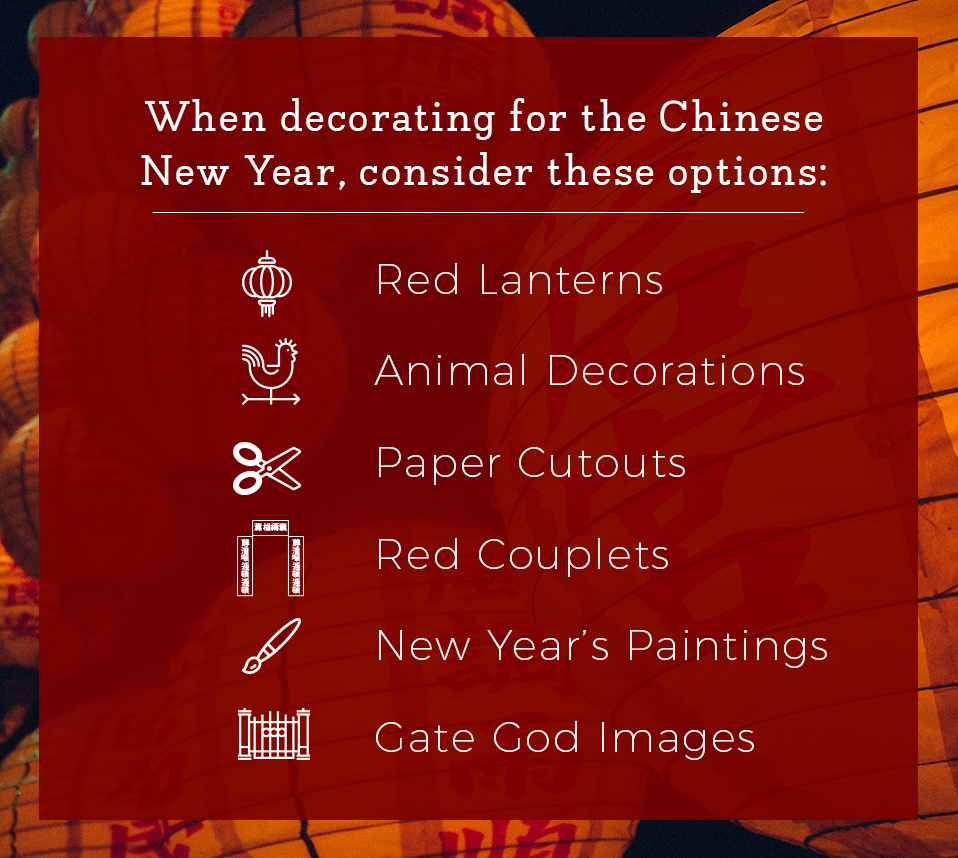 When decorating for the Chinese New Year, consider these options:

Dressing for the Celebration

Just as red is popular in the decorations for the Chinese New Year celebration, wearing red is also common. To celebrate with your family, get everyone a new red outfit. If your city has a Chinese market or Chinese shopping area, consider buying Chinese-inspired attire for the celebration.

Don’t forget red underwear for everyone in the family, too. Red underwear is often sold at the market. Since red is thought to fend off bad luck, many people think it’s lucky to wear red underwear.

No matter what type of clothing you choose, to keep with the Chinese tradition, it’s important to avoid wearing black. The color black is associated with death, which goes against the happy vibe of creating luck and prosperity for the new year.

Food to Prepare for the Chinese New Year

Your Chinese New Year celebration isn’t complete without a Chinese-inspired menu. Most Chinese families come together, reuniting all generations for a meal at home. Fish often highlights the menu for Chinese New Year celebrations. This comes from the belief that fish brings a surplus of money and luck, since the word for “fish” sounds like the word for “surplus.” Meat from other small animals, such as chickens or ducks, are also common for the celebration. Dumplings are a very important part of the celebration as well, especially in northern regions of China. They are thought to bring good luck. 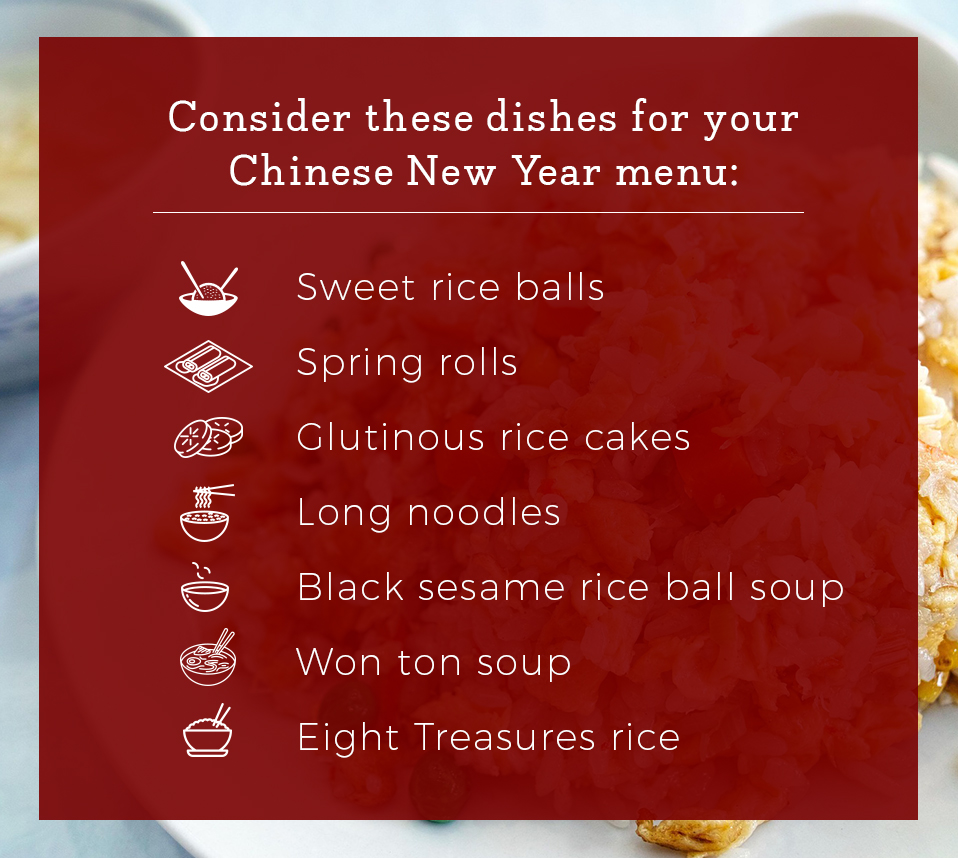 In addition to fish and dumplings, consider the following dishes for your Chinese New Year menu:

While the Chinese New Year’s Eve meal is considered the most important, many Chinese families continue gathering throughout the 15-day celebration. Families may rotate the location of the meals throughout the period.

To embrace the true spirit of the Chinese New Year, gather your family on Chinese New Year’s Eve for the traditional reunion dinner. Prepare some Chinese dishes from scratch or look for premade options at the supermarket. While traditional Chinese meals for the celebration take place at home, you might decide to dine out at a Chinese restaurant as part of your own modern celebration. The most important thing is to focus on the family and enjoy a happy time together. 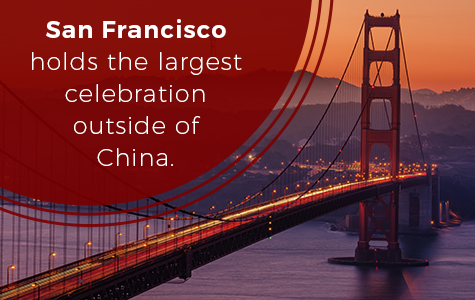 If you live in a large city, you may find local events related to the Chinese New Year. The holiday spreads far beyond China, with organized events all around the world. San Francisco holds the largest celebration outside of China, but you can find smaller scale events in many cities.

If you can’t find organized activities in your area, plan your own celebrations at home. Try these ideas to keep your family entertained:

Things to Avoid During the Chinese New Year

While much of the tradition focuses on what you should do to create a positive, happy, lucky new year, there are also superstitions about things you shouldn’t do during the 15-day celebration. Many of these actions are thought to bring bad luck upon the family. 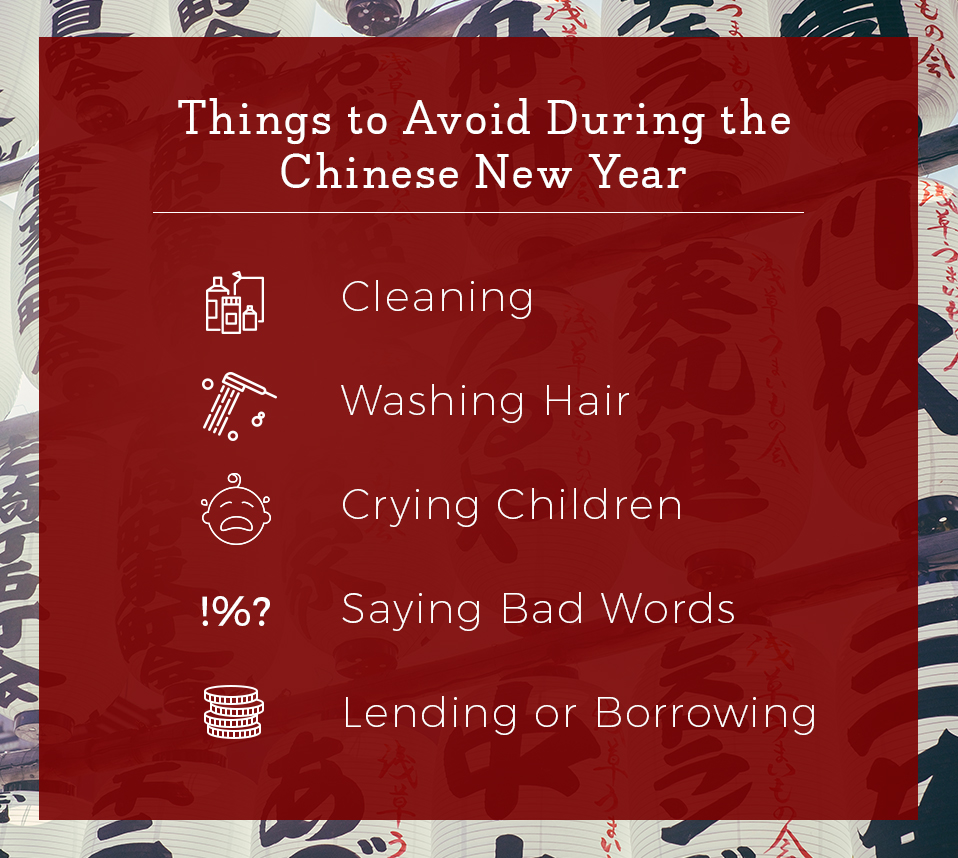 Avoid doing these things during your celebration to keep the good luck coming:

Whether or not you believe in superstitions, avoiding these things creates a more positive environment. You may even use it as a launching point for being more grateful and having a more positive attitude. We don’t recommend waiting too long to clean or to wash your hair, though.

Your Chinese New Year’s celebration can be as involved or as basic as you want. Take the traditions of the holiday that speak to you and run with them. Get kids involved in choosing the activities you do to celebrate — the red envelope of money will likely top their lists. Starting your own Chinese New Year’s celebration lets you experience a greater cultural understanding while starting your own family traditions you can look forward to with every new year on the lunar calendar. Free Shipping on orders over $200 to the Contiguous United States(Excludes Alaska and Hawaii.)