The teams are set and Super Bowl LI is right around the corner. For most of us, that of course means plenty of snacks on Super Sunday, including nachos, buffalo wings and the like.

What if each NFL team was represented as a food item at your Super Bowl party? Here’s what that might look like. 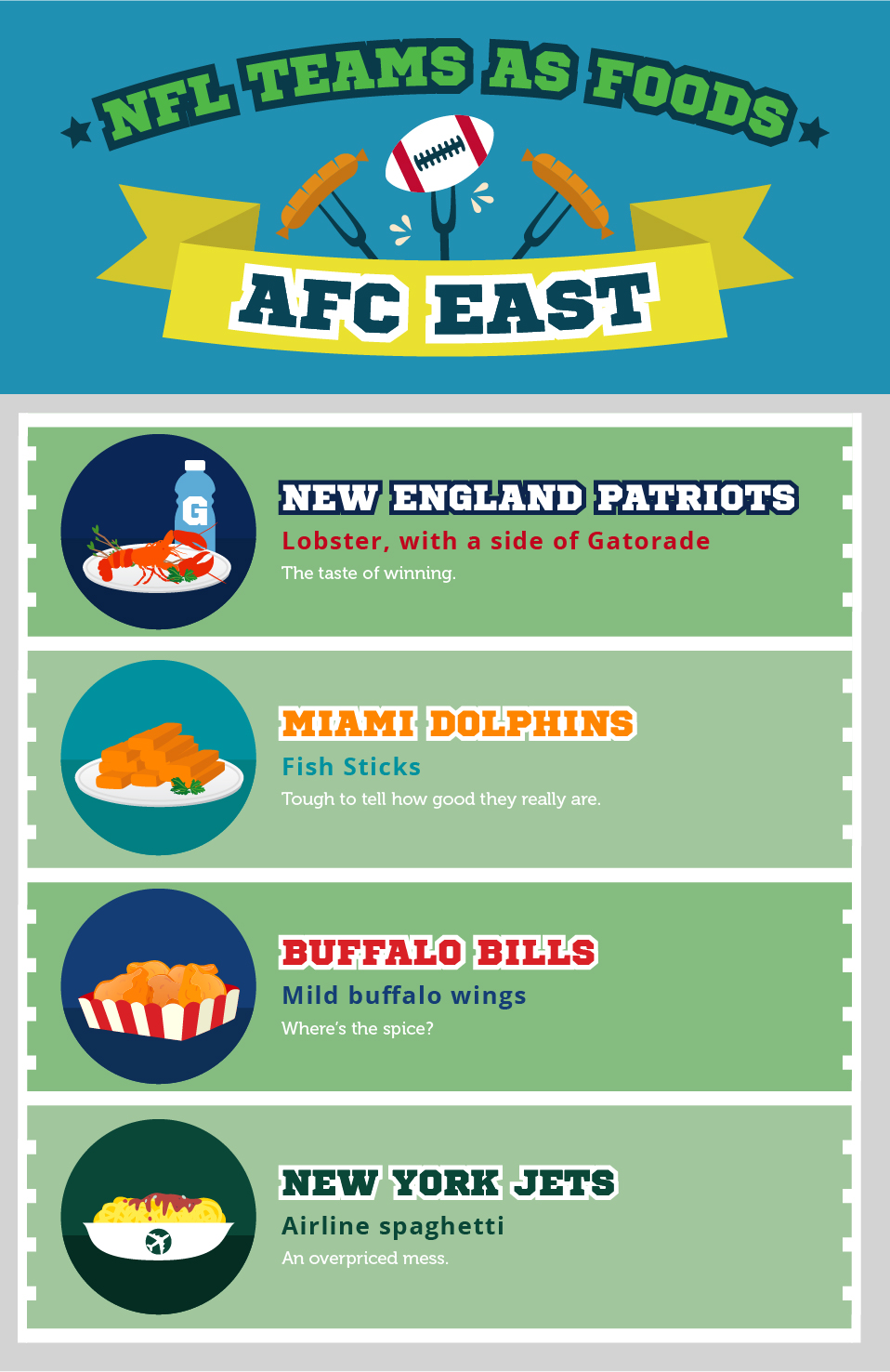 New England Patriots: Lobster, with a side of Gatorade. Lobster doesn’t get much better than it is in New England, and the same can be said about pro football. The Patriots are looking to win their fifth Super Bowl title in 15 years.

Miami Dolphins: Fish Sticks. Like the Dolphins, fish sticks have something to do with the sea, but we don’t really know what’s inside or how good they are. The team made a respectable run into the playoffs before being trounced by the Steelers in the Wild Card round.

Buffalo Bills: Mild buffalo wings. Wings in Buffalo were way hotter in the early ’90s, but where has the spice gone? The Bills haven’t made the playoffs since 1999, the longest active streak in the league.

New York Jets: Airline spaghetti — sounds good at first, but really turns out to be an unnecessarily overpriced mess. The Jets were one of the most under-achieving teams in the league this year with a 5-11 record. 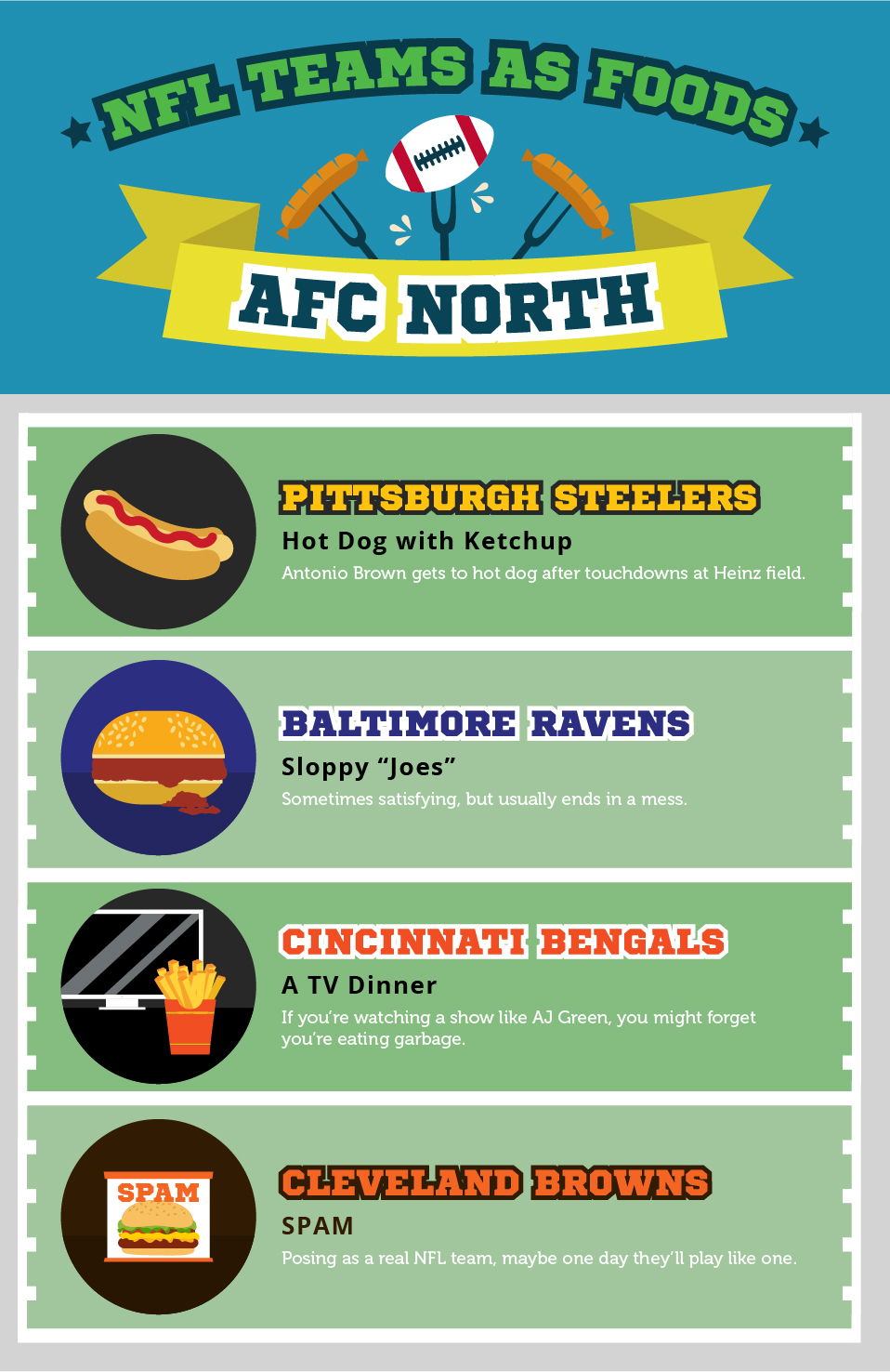 Pittsburgh Steelers: Hot Dog with Ketchup. Steelers star Antonio Brown likes to hot dog after touchdowns, especially when it’s at Pittsburgh’s Heinz Field. The Steelers made yet another deep playoff run this season.

Baltimore Ravens: Sloppy “Joes,” as in Flacco. It sometimes satisfies, but lately usually just turns into a mess. The team had a .500 record this year, but maintains faith in its Super Bowl-winning quarterback.

Cincinnati Bengals: A TV dinner. If you’re watching a show like AJ Green, you might forget you’re actually eating garbage. Green, when healthy, is one of the best receivers in the game. Unfortunately, he wasn’t healthy for much of the season and the Bengals finished 6-9-1.

Cleveland Browns: SPAM. What is SPAM, anyway? Posing as something real, just as the Browns are posing as a real NFL team. The team finished 1-15, the worst in the league, and hasn’t made the playoffs since 2002. 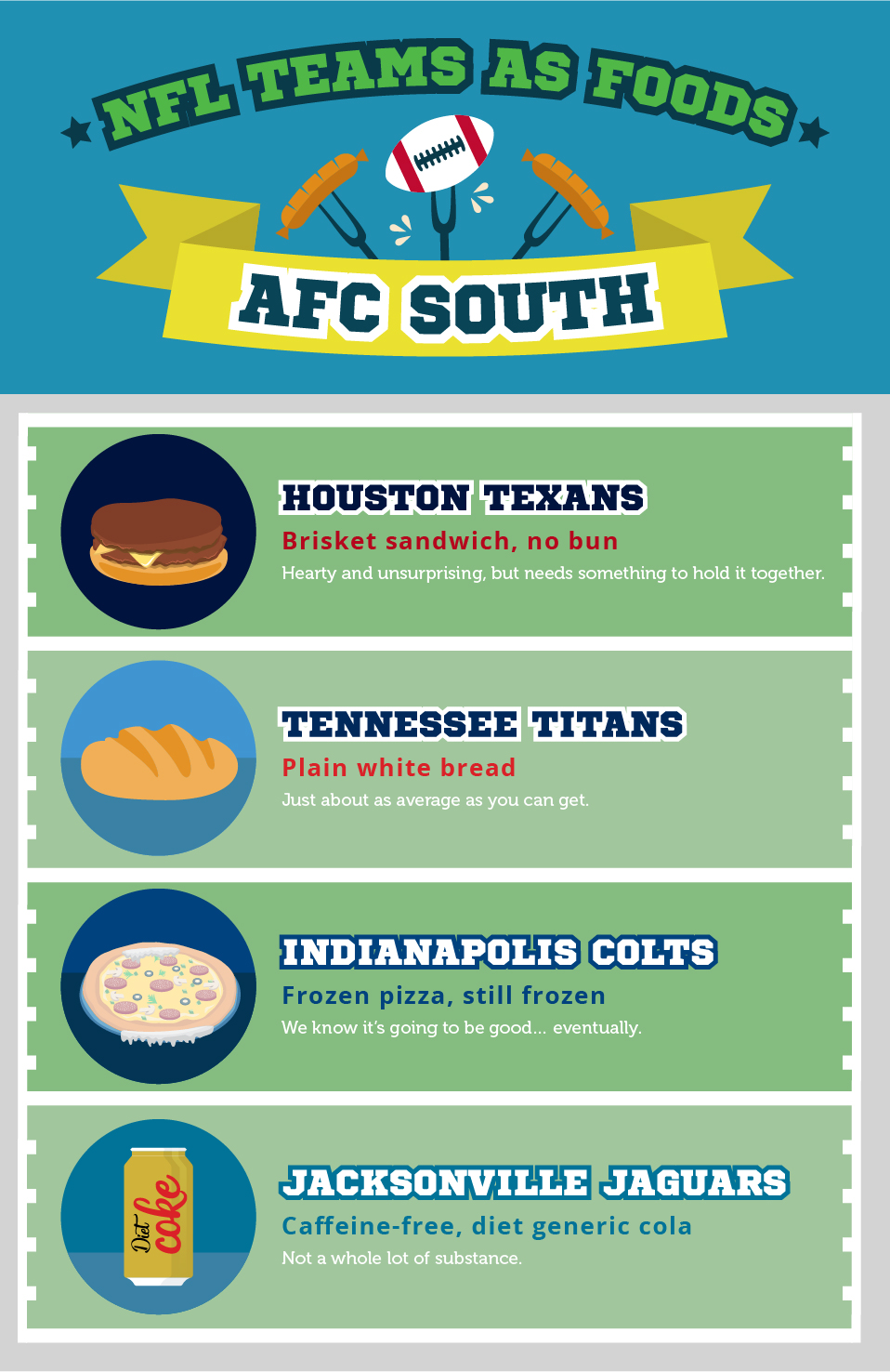 Houston Texans: Brisket sandwich, no bun. The Texans were hearty and unsurprising, like brisket, but needed something to hold it all together. A playoff win and a solid showing versus the Patriots should give the team confidence into next season.

Indianapolis Colts: Frozen pizza, still frozen. Andrew Luck and the Colts will be good at some point … eventually. Luck is certainly the real deal, and his receivers are great. But the team will remain cold if it doesn’t address issues on its offensive line and defense.

Tennessee Titans: Plain white bread. The Titans are about as average and plain as you can get. Quarterback Marcus Mariota showed flashes of brilliance this season, but it wasn’t enough to drive the 9-7 Titans into the playoffs.

Jacksonville Jaguars: Caffeine-free, diet generic cola. The Jags can be tasty at times, but we know there’s not a whole lot of substance. Its 3-13 record may not show it, but the Jags did have one of the best defenses in football this year, something it can build on in 2017. 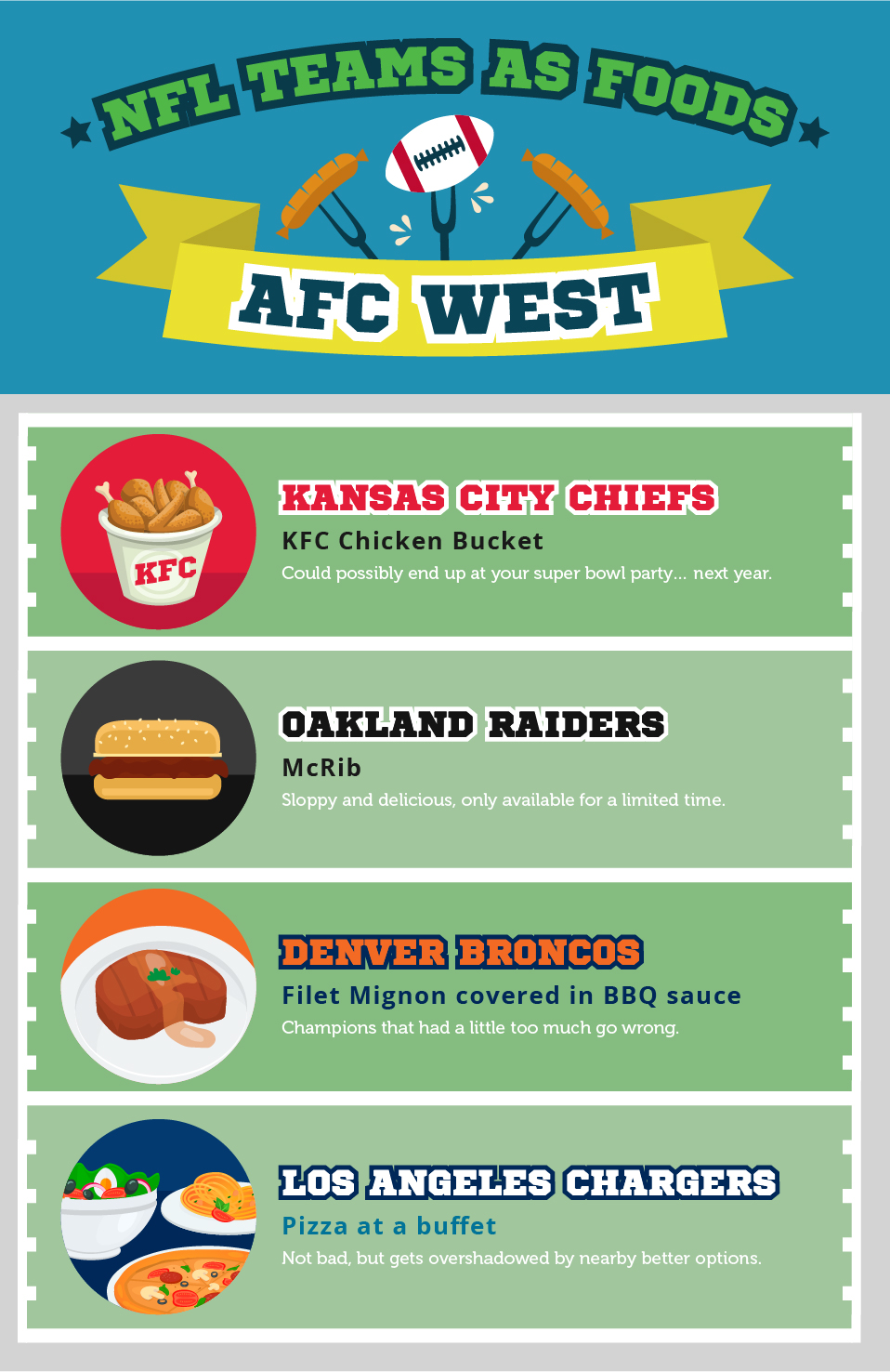 Oakland Raiders: McRib. The Raiders had a delicious season that turned sloppy, and nobody knows how long they’ll be around. Fans will be left thinking, “What could have been,” had quarterback Derek Carr not gotten injured. That’s if the team stays in Oakland — it intends to move to Las Vegas in the offseason.

Kansas City Chiefs: KFC Chicken Bucket. Like a bucket of chicken, the Chiefs seem tempting and could end up at your Super Bowl party … but will have to wait ’til next year. The Chiefs had a great regular season but once again disappointed in the playoffs.

Denver Broncos: Filet Mignon covered in BBQ sauce. The Broncos deserve championship-caliber food, but had a little too much go wrong. It wasn’t a terrible season at 9-7, but their defense is far too good to miss the playoffs.

Los Angeles Chargers: Pizza at a buffet. The Chargers aren’t bad, but are often overshadowed by better options. Playing in one of the toughest divisions in the NFL, the Chargers slumped to a 5-11 record. And now they’re off to Los Angeles. 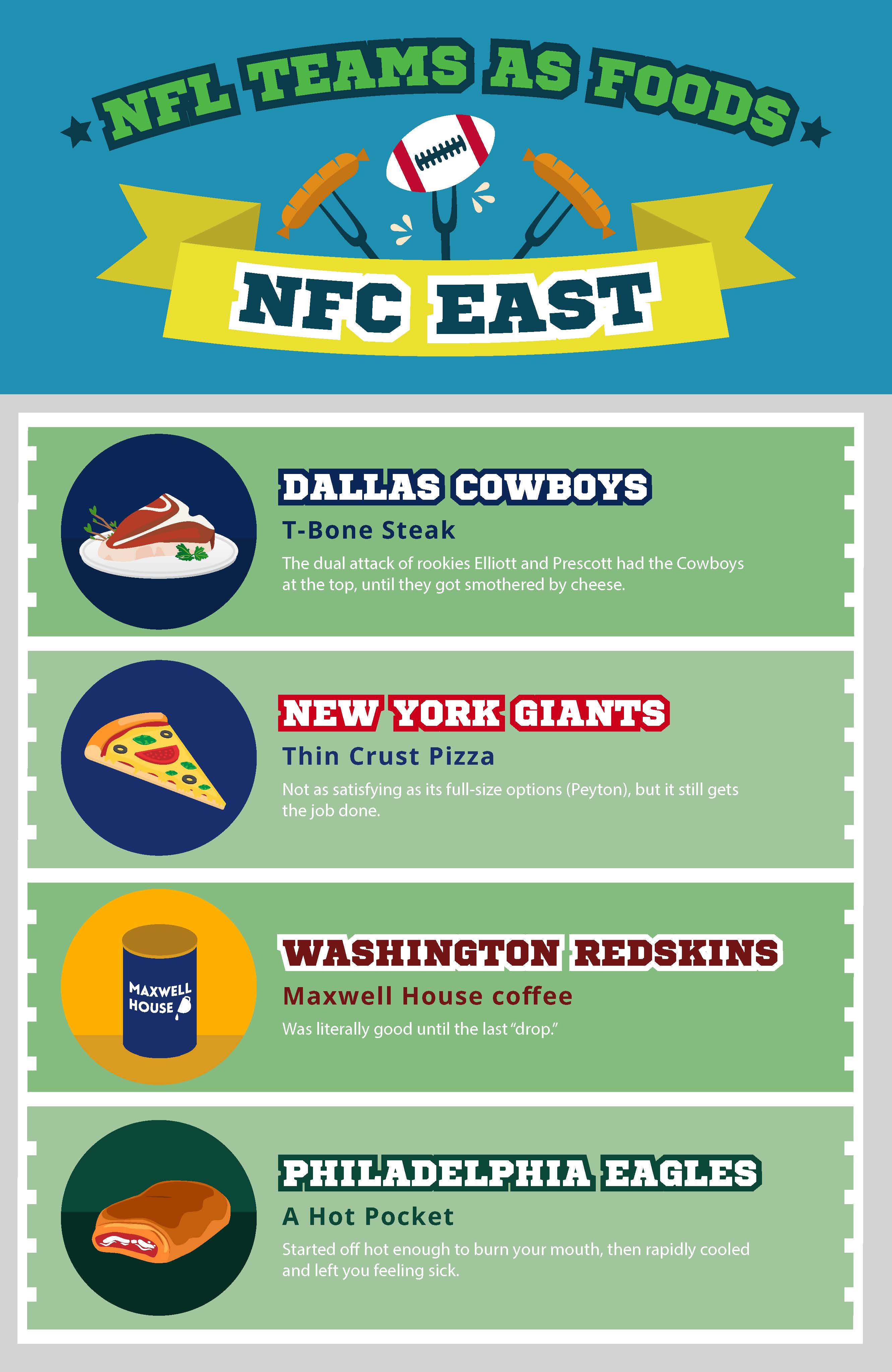 Dallas Cowboys: T-Bone Steak. The dual attack of Cowboys rookies Elliott and Prescott had the team at the top, until they were smothered by cheese. The Cowboys were the hottest team in the NFC until the Packers ruined that in the playoffs.

New York Giants: Thin Crust Pizza. Eli and the Giants weren’t as satisfying as full-sized options (Peyton), but got the job done for the most part. A strong defense led the team into the playoffs, but they, too, were thwarted by Green Bay.

Washington Redskins: Maxwell House coffee. The Redskins were literally good until the last “drop.” Some may say the 8-7-1 Redskins overachieved with QB Kirk Cousins, but a few made plays here and there and the season could have been very different.

Philadelphia Eagles: A Hot Pocket. The Eagles started off hot enough to burn your mouth at 3-0, but cooled rapidly and left you with a sick feeling. The team was fourth in the division with a 7-9 record. 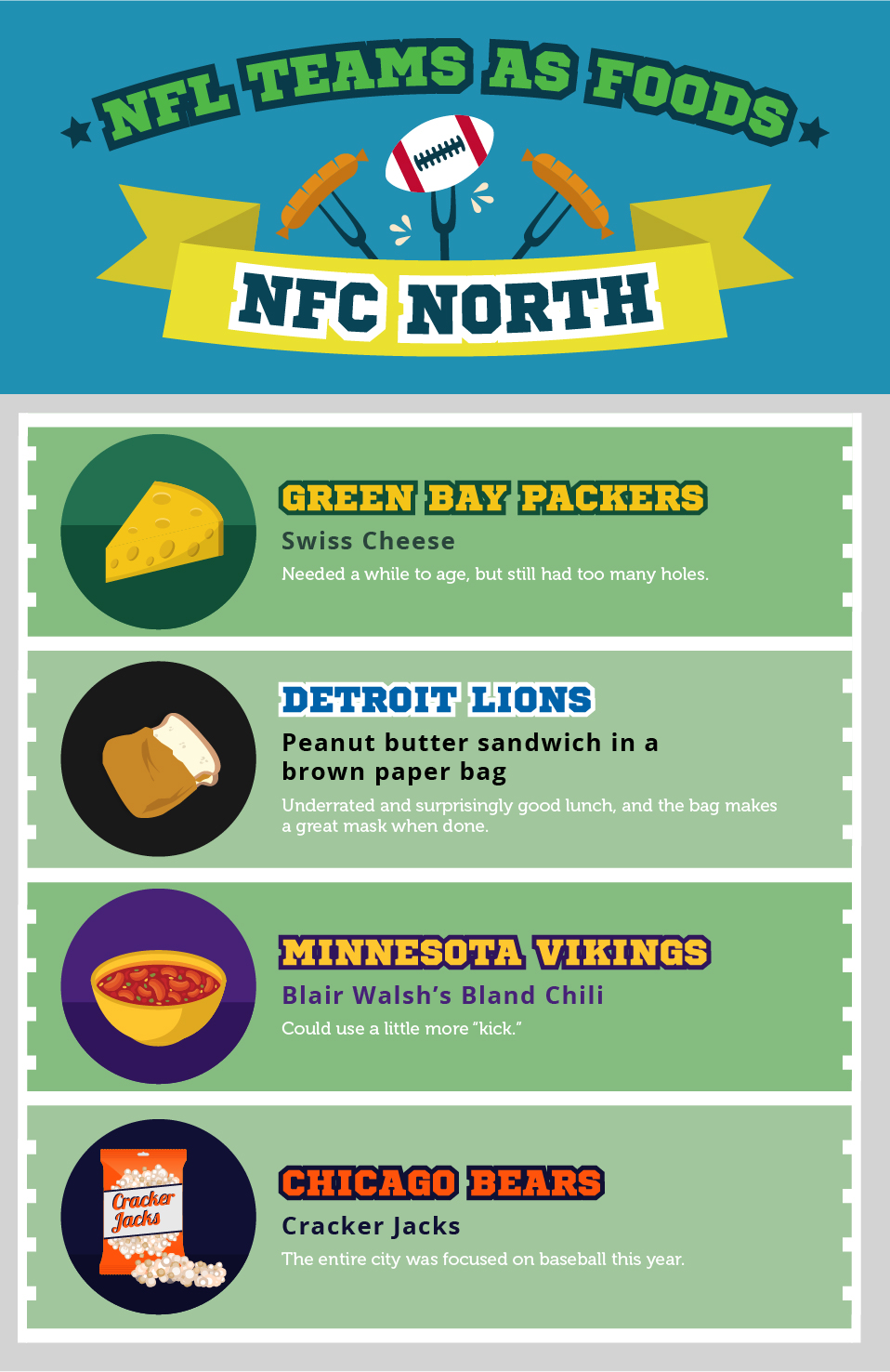 Detroit Lions: Peanut butter sandwich in a brown paper bag. The Lions were underrated and surprisingly good, but in the end the brown bag made for a great mask. The team hasn’t won a playoff game since 1991.

Green Bay Packers: Swiss Cheese. The Packers needed a while to age, but still had way too many holes. Aaron Rodgers led the team valiantly to the NFC Championship game, but a leaky defense was too much to overcome.

Minnesota Vikings: Blair Walsh’s Bland Chili. The Vikings could have used a little more “kick,” which is part of why they cut Walsh at midseason.

Chicago Bears: Cracker Jacks. Let’s face it, Bears — the city was focused on baseball this year. Look for QB Jay Cutler to move on and for the 3-13 Bears to bounce back next season. 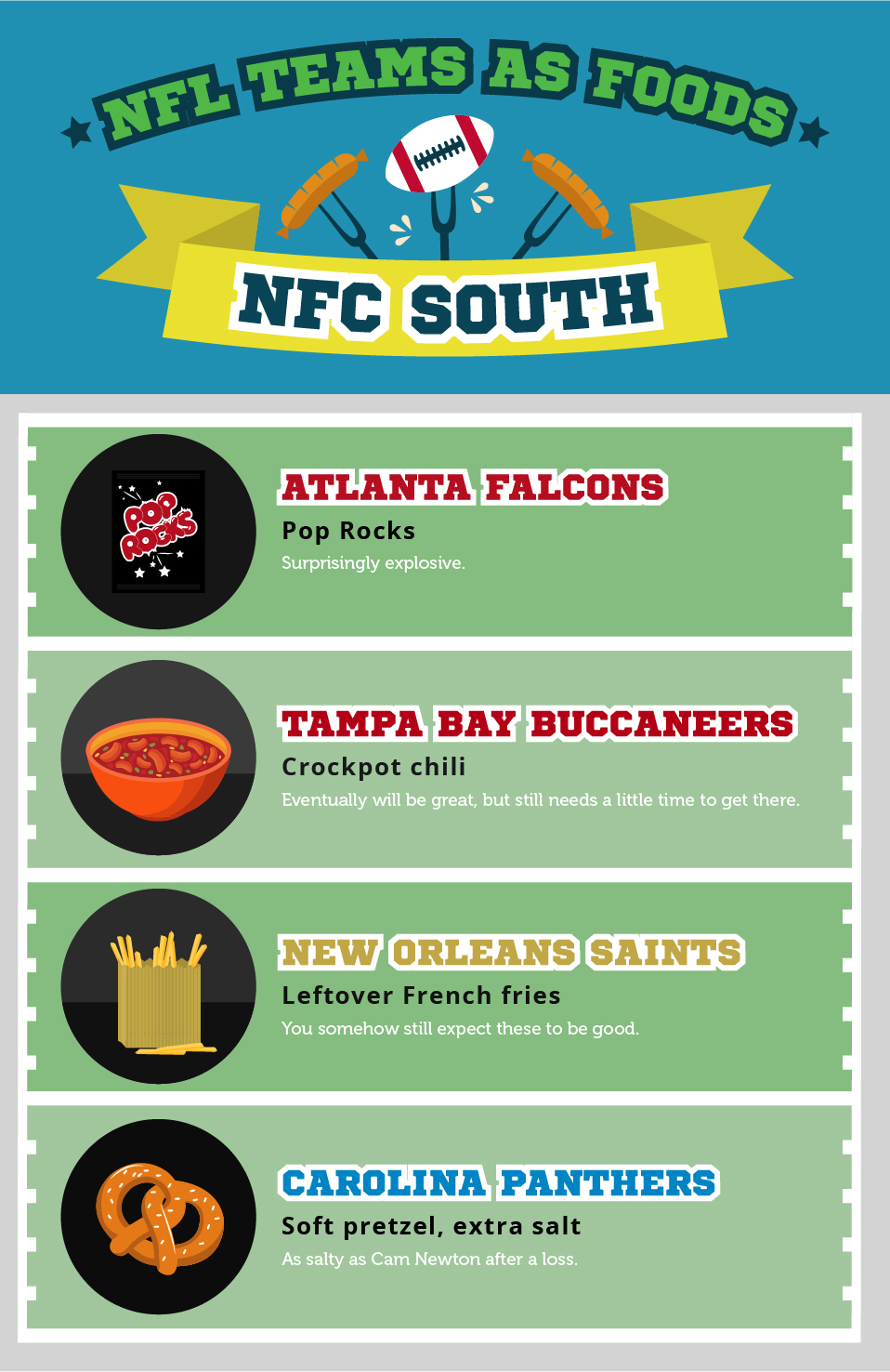 Atlanta Falcons: Pop Rocks. The Falcons, this year’s NFC Super Bowl representative, was surprisingly explosive. We knew Julio Jones and Matt Ryan were for real, but the rest of the offense — and defense — have helped lead the team to the big game.

Tampa Bay Buccaneers: Crockpot chili. The Bucs played like a good chili: will be great eventually, but needs time to get there. If Jameis Winston continues to improve at his current rate, the Bucs will be a force to be reckoned with.

New Orleans Saints: Leftover French fries. Brees and the Saints are the leftovers you somehow still expect to be good. Brees still has talent, but there wasn’t enough surrounding him this season.

Carolina Panthers: Soft pretzel, extra salt. The defending NFC champs were soft this season, and Cam was extra salty after most losses. A 6-10 season is not what the team expected following a tough loss to Denver in the Super Bowl the previous season. 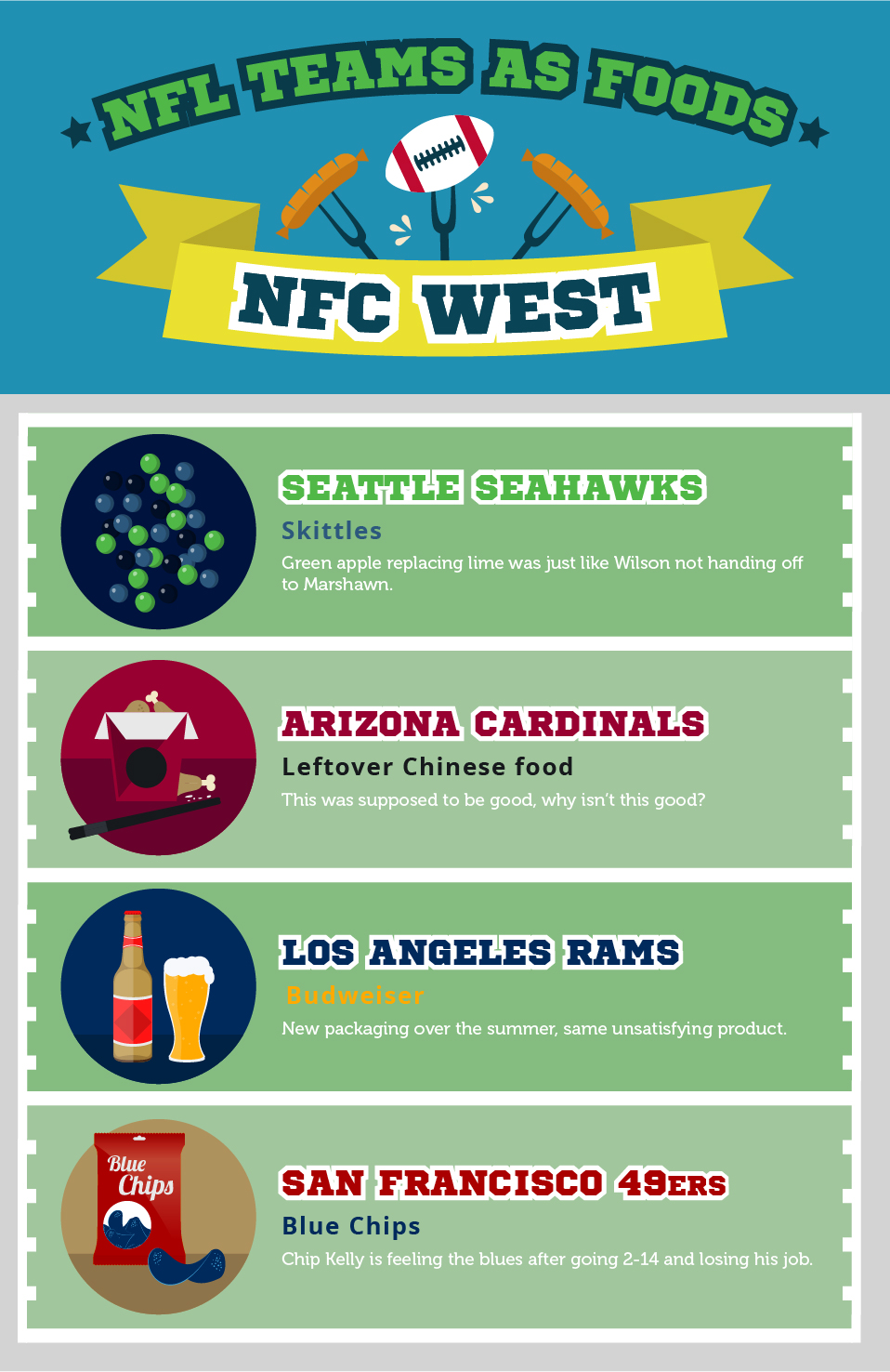 Seattle Seahawks: Skittles. Green apple replacing lime was like Wilson not handing off to Marshawn Lynch during their Super Bowl — just different. The team’s aging defense remains one of the best in the league, but a shot of youth could go a long way.

Los Angeles Rams: Budweiser. The Rams received new packaging over the summer, but delivered the same unsatisfying product. With a new coach, the team hopes year two in its return to L.A. will be much better.

San Francisco 49ers: Blue Chips. Coach [Chip] Kelly was feeling the blues after a 2-14 record got him fired. The Niners have plenty of work to do to get back to the team’s glory days. BAKEWARE NOW AVAILABLE!
Free Shipping to USA on orders over $200
Extra 15% Off with email sign up

BAKEWARE NOW AVAILABLE!
Free Shipping to USA on orders over $200
Extra 15% Off with email sign up

Free Shipping on orders over $200 to the Contiguous United States(Excludes Alaska and Hawaii.)