Kale Yeah! Types of Kale and Their Best Uses 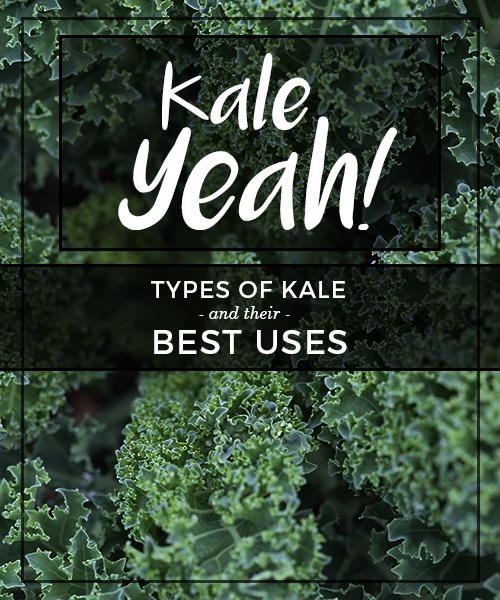 Kale has long been in the midst of a major movement, inspiring vegans, vegetarians and other vegetable lovers the world over. But this green can be a bit of an acquired taste for those who might be wondering what’s wrong with plain old spinach or arugula.

Kale, though, is more versatile than you might think. It can stand up against long cook times and it’s easily transformed into chips in a pinch. Kale also features a ton of essential nutrients, from vitamins to minerals and more. Here’s a look at why we love kale in its many different forms.

So, What Exactly Is Kale?

Kale is a member of the cruciferous family, a group of vegetables best known for their ability to support detoxification, as well as to reduce the risk of certain cancers. Other cruciferous vegetables include broccoli, cabbage, collard greens, Brussels sprouts and cauliflower.

Kale is all the rage these days, present in everything from smoothies to soups and even skincare — but what makes it that much better than its other cruciferous counterparts?

Well, for starters, it’s rich in vitamins and minerals like magnesium, calcium and folate. It also only contains about 36 calories per one-cup serving, no fat and five grams of fiber.

If that’s not enough incentive for you to start throwing kale into all of your favorite recipes, here is a quick look at the many nutrients you can expect to find inside these dark and leafy greens:

While you may only see one or two in the supermarket, there are quite a few kale varieties, each with a unique look and texture. Here’s a quick rundown on the various kinds of kale, as well how to use them in the kitchen:

Curly kale is the type of kale you’ll most often see in the grocery store. Known for its dark green or sometimes purple color and tightly wound curls, curly kale is a bit bitter for some people, featuring pungent notes of pepper.

Curly kale is quite versatile — this is the kale you’ll find most often in unexpected places, as it’s the most common. It’s the kale of green smoothies and kale-dominant salads. This low-cost option fits in easily with flavors both sweet and savory. The taste leans toward bright, but at times, it can seem bitter and a little more pungent than your average greens.

A good way to counteract the bitter taste is to stir fry curly kale with a little garlic and olive oil or include it in a salad alongside strawberries or with a lemon-tahini dressing. Fats and a sweet flavor will help balance out the taste — but keep in mind that these curly leaves are fantastic as chips as well as in soups, salads or anywhere you could use a little dash of health benefits.

A kale of many names, lacinato, or dinosaur kale, has long been a staple of Italian cuisine and is considered to be a hearty-cooking green that can stand up to a substantial sauce. Characterized by large, blue-green leaves about two to three inches wide, this type of kale turns crisp with little effort, rather than wilting under pressure.

A mid-winter staple, lacinato kale works well when added to a lentil soup, and it perfectly complements grains and a multitude of legumes. For a fresher take on dino kale, cut it into thin strips, massage with a hint of olive oil and toss it into a beautiful green salad. It also works well with sweet potatoes or when added to a hearty — and healthy — chili.

What makes this type uniquely versatile is its ability to be used as a baby leaf, as well as after it’s been left to fully mature. Leaves are best enjoyed when firm, vibrant and fresh.

While sweeter and more peppery than other types of kale, you can prepare red Russian in the same way as you would curly or dinosaur kale. No matter how you do decide to prepare it, though, its tender leaves make it an excellent way to get into the kale game if you’re not already on board. Use the baby greens in a salad, no massaging required. You can also work this peppery leaf into a smoothie for an unexpected twist — its unique flavor works well will antioxidant-rich blueberries, pineapple and coconut water.

Though ornamental kale has been relegated to the floral end of the garden rather than with the other types of kale, it is edible. There’s never been anything wrong with eating this decorative green — it’s just tougher, and arguably less tasty than other kale types.

While ornamental kale looks just as pretty in the garden as it does playing the role of a garnish for your meal — it’s a step up from parsley, too, if you ask us — it also can be used in soups or stews. Because of its inherent toughness, it’s best to use ornamental kale both sparingly and in meals that require a longer cooking time. It’s definitely not a salad green, but a braised chicken stew or slow-cooked pot roast may be the perfect time for this green to shine.

Chinese kale looks considerably different than its crinkly brethren. It somehow manages to look as though broccoli and spinach came together and made a hybrid veggie, with large, flat, glossy leaves and thick stalks that can easily be chopped and cooked up exactly like broccoli stems.

As with many Chinese staples, the best way to go is stir-fry. Start with some sautéed garlic, then add the kale to the pan. Pour some boiling water over the top and cook until the leaves have become wilted. From there, add some sesame or olive oil and remove from heat. Serve with meat or additional veggies, or work the cooked kale into a whole other dish. The flavor, like the stems, most closely resembles broccoli, so you can easily use this in place of those little cruciferous trees — with rice and chicken, baked into a quiche or as a steamed accompaniment to a baked salmon.

Redbor kale is an attractive kale variety with red, ruffled leaves. It can be used both on the plate and in the garden as an ornament. With shades ranging from red to deep purple with hints of green, it’s easy to see why.

Now, don’t go thinking redbor kale is just another pretty plant. When used right, it can be roasted and toasted with the best of them. Like curly and lacinato, redbor kale fits in comfortably in any bean soup, or it can join any green salad after a gentle massage with olive oil. Another idea is to try bitter against sweet, and serve it with roasted butternut squash.

Tips for Adding More Kale into Your Diet

If you’re a veggie aficionado, kale is relatively easy to get the hang of. You can easily add it to a soup or your favorite salad recipe. But, since it is somewhat of an acquired taste for many, there are some things you can do to make it, well, more palatable:

All kale features a center stalk. It is edible, but it can be relatively fibrous and hard to chew. For best results in your kale-centric pursuits, we’d recommend removing this and cutting the kale leaves into strips or smaller pieces.

If you’d like to use the hearty stalk, it can be utilized much in the same way you might use celery. Chop it up, add it to sauces or let it sauté with some aromatics like onion and garlic.

Selecting the right bundle of kale at the supermarket is relatively easy. Look for heads that are the most vibrant in the pile, and if possible, stick with those that fall on the smaller end of the spectrum. They’ll typically be the freshest and most flavorful.

Kale chips are super easy to make, and they’re one of the fastest ways to recruit more family members to team kale. Coat them with various toppings like tahini, cashew cheese, nutritional yeast or good old sea salt.

Here’s a quick recipe to make basic chips in your oven. Insider tip: You can even make them in the toaster oven in about 10 minutes if you’re short on time.

Preheat your oven to 350 degrees

Meanwhile, remove the center stems from the kale. Cut the leaves into small pieces and arrange on a large baking tray.

Drizzle the olive oil over the kale and mix with together with your hands until all the leaves have been coated.

Top with sea salt — or additional toppings, if desired — and pop the baking tray into the oven for about 10-15 minutes.

Remove from the oven when the leaves are looking browned around the edges — brown, not burnt. This is important.

Let the chips cool and serve.

With salads, you can actually use kale anywhere you see fit. We think kale works nicely when it’s paired with fruits or sweeter dressings due to its strong, peppery flavor, but anything goes. If the idea of using kale in a salad seems like a bit much for either the taste buds or the jaw, try giving your kale a massage first. As silly as it sounds, massaging the kale, much like tenderizing meat, is a way to break down cellulose found in the leaves. It makes them more tender and palatable for use in any salad you can dream up.

The process is relatively easy. Work the leaves, much in the way you would if you were to be kneading bread, as you remove them. You’ll know it’s working when you see the shade of green changing from dark to a much more vibrant green. Add some oil if desired, but it’s not necessary. As an added bonus, your relaxed greens will be much softer than before, yet they won’t wither away if you try to cook them like other greens — ahem, spinach.

Tender, yet substantial — one of the many reasons we love kale.

Juices and smoothies are one of the more ubiquitous kale uses, but for a good reason. Since kale is loaded with tons of great stuff — antioxidants, vitamins, minerals and more — it’s the perfect companion to some in-season fruits or more mellow greens.

Plus, if you’re kale-averse, you can try adding some sweetness to the mix. Kale works great in a smoothie with blueberries and almond butter, or up against frozen mango, pineapple, banana and almond milk in a tropical, slightly green smoothie. Play with different fruits that suit your tastes, along with some protein for a balanced meal.

If you have a juicer on hand, add some lemon and ginger along with a hefty portion of kale for a green detoxifying juice. Or, if you’re looking to disguise kale’s bitterness, add some apple to make things go down a bit more smoothly. Not into apple juice? Throw some beets in with kale and lemon for an earthy, tart start to your morning.

Inspiration for vitamin-rich kale recipes in all their iterations? Then it’s the perfect time to stop by Ceramcor the makers of Xtrema ceramic cookware for some new supplies. From kitchen utensils and large rectangular baking pans that are made for kale chips to saucepans and Dutch ovens designed for a great stew and a night in, we have everything you need to transform your kitchen in a way that’ll make you want to cook a little healthier.

Up to 25% Off Everything Site-Wide
Pre-orders available on Versa Line
Plus, Free Gift & Shipping over $250

Up to 25% Off Everything Site-Wide
Pre-orders available on Versa Line
Plus, Free Gift & Shipping over $250

Up to 25% Off on Everything Site-Wide

Free Shipping over $250 in the Contiguous United States(Excludes Alaska and Hawaii.)