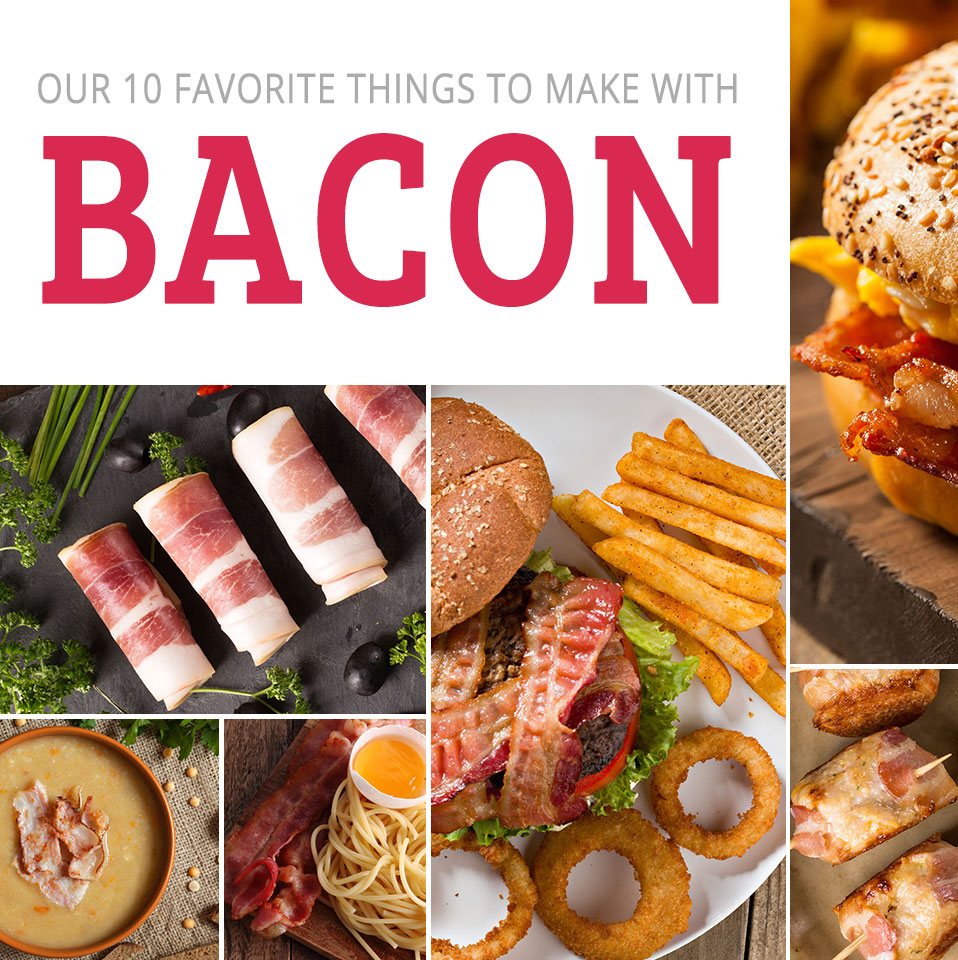 Foodies all over the country know that we are in the midst of a bacon renaissance.

In fact, in 2013, marketwatch.com reported that bacon was a $4 billion industry in the United States. Yes, that is billion with a “b.”

While bacon has long been a staple breakfast food, the meat’s salted deliciousness has found its way into our sandwiches, wrapped around our seafood and even atop our ice cream.

However, with so many ways to prepare and serve bacon, it can be difficult to know where to start. That’s why we wanted to put together a list of easy recipes with bacon. Included are our favorite dinner recipes with bacon, breakfast recipes with bacon and bacon appetizers. Each one is guaranteed to make your mouth water and leave your deepest bacon craving satisfied.

Bacon Preparation, a Wealth of Options

Before we get to our best bacon recipes, we wanted to provide a quick overview of the different ways you can prepare bacon.

If you want a crispy, drier strip of bacon, then baking is the way to go. Just make sure you use a use a pan that can catch the drippings. Recipes recommend baking at 375 degrees for about 15 to 20 minutes. This is a great way to prepare bacon bits for salads or baked potatoes.

This is the classic bacon preparation technique. Using a frying pan, simply cook bacon over low medium heat. When you’re done, you’ll want to dry the bacon with a paper towel to remove excess grease. Just make sure you have a good pair of tongs to turn the strips of bacon, as grease can splatter. We highly recommend an Xtrema ceramic easy clean skillet. They’re 100% green and come complete with easy grip silicon handles, making the process of cooking bacon a snap!

Recently, grilling bacon has become popular. The process is pretty simple, but there are a couple of things to keep in mind. First, you want to make sure you cook the bacon over indirect heat. Bacon grease drips, and if it is directly over the coals, you are liable to have flare ups. Like stovetop cooking, make sure to use a paper towel to remove excess grease when you’re done.

You may be surprised, but if you like crispy bacon, the microwave is actually a good option, especially if you don’t have much time. On a microwave safe plate, lay out a paper towel, and then place the bacon on top, being careful not to overlap any of the strips. Place another paper towel or two on top of the bacon and microwave on high four to six minutes.

Now that we have some of the basic preparation techniques out of the way, here are our 10 favorite easy bacon recipes!

This is one of those classic recipes with bacon. It feeds up to six people and requires very little prep, making it perfect for the family on the go!

Mix the eggs, milk, salt and mustard together. Next, layer the bread cubes on the bottom of a greased 9 x 13 baking dish. Layer the bacon and cheese over the bread, and then pour the egg mixture over both. Cover with plastic wrap and refrigerate over night. In the morning, bake at 350 degrees for 45-60 minutes.

What’s better than a perfect shrimp? The perfect shrimp wrapped in crispy bacon! Considering how tasty these shrimp are, you will be shocked with how easy they are to prepare.

Preheat the oven to 450 degrees. Wrap the shrimp with a half slice of bacon and secure it with a toothpick. Place on a baking rack resting on top of a foil-lined jelly roll pan and sprinkle both sides with the seasoning. If you like more kick, just use more seasoning. The jelly roll pan is there to catch the drippings while keeping the shrimp from becoming limp.

If you’re southern, this is sure to be a go-to comfort food. But that doesn’t mean the rest of the country can’t enjoy it, too. Plus, it’s a very easy bacon recipe, so it is a great option if you want to whip something up in a hurry.

Start by rendering the chopped bacon in a sauce pan, using medium high heat. After about four minutes, add the milk, butter and cayenne and bring it to a boil. Add the grits and bring down the heat, stirring for 30 seconds. Next, add the cheese and stir until the cheese has melted. Finally, cook uncovered for four to five minutes. Serve immediately.

This warm, gooey and flavorful dish is sure to make any grit hater into a bonafide Southerner!

One of the primary complaints about chicken is that it easily dries out. One perfect way to keep chicken moist and tender is to cook it wrapped in bacon. Plus, all of that wonderful saltiness from the bacon will impart its flavor onto what is often a bland meat.

Although the idea of bacon wrapping may at first appear intimidating, this recipe for chicken wrapped in bacon is actually deceivingly easy. So if you want to impress your guests or even the pickiest of kids, try this recipe out.

Remove the chicken and take off the bacon — if you want to garnish with the bacon, make sure to set it aside. Roast for a final 15 minutes to brown the skin of the chicken. Next, remove the carrots and dispose of them.

Once you place this perfectly roasted and extraordinarily juicy chicken on a platter, your family will come to believe that they’d never truly tasted chicken before then!

This is another easy and tasty chicken and bacon recipe. This one uses a slow cooker, which is a great option for families that want well-cooked meals but don’t necessarily have time to cook all day. So prepare the meat, load up the slow cooker and leave it. You won’t regret it!

In a skillet, cook the bacon until crispy, and then use a slotted spoon to transfer it to a paper towel.

In a bowl, mix flour, salt and seasoning. Dredge the chicken in the mixture.

Next, add the stock, rice, onion whites, celery and carrots to a greased slow cooker. Refrigerate the onion greens and bacon.

Add the chicken to the slow cooker, along with any pan drippings, and cook for seven to eight hours on low. After that time is up, chop the chicken and return it to the cooker, adding the heavy whipping cream along with four cups of cheese. Once the cheese has melted, serve in a bowl and top with remaining cheese, onions and bacon.

This is a great recipe if you need to bring something to a party or a tailgate. It is a wonderful take on a classic snack. Plus, it’s super easy!

Mash the avocados. Add the tomatoes, cilantro, bacon, onion and jalapeño and mix together. Finish it off with a splash of lime juice and a pinch of salt. Voila! You’ll have a dip that will live up to the toughest of critics.

This is a fancy sandwich that is incredibly simple to make. Each ingredient gets a chance to shine and is a perfect combination of sweet, salty and creamy.

Split the baguette and spread both sides with honey mustard. Layer the cooked bacon, apple slices and brie. We recommend using bacon that is still warm so the brie gets soft and melted.

This sandwich sounds a little weird, but we dare you to try it. It might be you new favorite take on grilled sandwiches!

Butter the pan side of each slice of bread. Place one slice of bread in the skillet and layer the banana, peanut butter and bacon slices. Cover with the other slice of bread. Grill the sandwich in a pan over medium heat until each side is brown. Serve warm.

This is one of the best autumn bacon dinner recipes. Using seasonal butternut squash, it is a wonderfully warm comfort food that is perfect for when you’re preparing for the coming winter. It uses a number of ingredients but the prep work is easy, so don’t feel intimidated. Plus, it serves 6 to 8 people, so it is great if you have a lot of hungry mouths to feed.

First, cook the pasta as directed on the package. While the pasta is cooking, steam the cubed Butternut Squash until soft. Blend the squash along with 1/2 cup of milk in a blender, until smooth. In a Dutch oven, melt the butter and sauté the onions for three to five minutes, until translucent. Add the garlic, sage and nutmeg and cook for an additional minute. Whisk in the flour and cook over medium heat until it starts to brown. Then, whisk in the remaining milk.

Stir in the cheddar, parmesan and butternut squash puree and whisk until the cheese has melted. Allow the liquid to slowly simmer, and then add the cooked pasta and cooked bacon. Season to taste and serve!

Perhaps the most important revelation from the current bacon boom is that bacon can be a dessert food! This recipe for candied bacon is a versatile topping. It goes well with vanilla ice cream, but is also great on apple pie, or even sweet breakfast foods, like maple syrup topped pancakes. You can just eat it by itself, too — it’s that tasty.

Preheat the oven to 325 degrees.

Combine all of the ingredients, except the bacon, into a bowl. Places the slices of bacon in the in the mixture and coat thoroughly.

Place the coated strips on a baking sheet lined with parchment paper. Take the remaining mixture and sprinkle it over the top of the bacon strips.

Take another piece of parchment paper and cover the bacon, and then place another baking sheet on top of the paper so the bacon stays flat as it cooks.

Cook for 20 minutes. Check to see if the bacon has crisped. Under no circumstances should you increase the heat. If the bacon is not yet crisp, don’t be afraid to cook for an additional 10, 15 or even 20 minutes. The low heat is key, and so depending on the thickness of the bacon or the heat balance of your oven, cooking times may vary greatly.

Once your bacon is crisp, you can eat it as is or crumble it on top of your favorite creamy dessert!

If you want the best tools for cooking what is arguably the best food in America, check out the Xtrema line of ceramic healthy cookware!